Bring On The Bling, Baby

Robbie was out with Aashi the other night when a woman walking by glanced at her, came over and suddenly exclaimed “Que linda! She has her ears pierced!” And then with a proud knowing grin, said, “She’s Latina, isn’t she.” Robbie of course explained that Aashi is part Indian, Filipino, Italian and Spanish. The woman nodded in approval, as if to say “Of course!” And as quickly as she rushed over, she left, but not before declaring, “We love our jewelry, don’t we?”

Yes, “we” do. And by “we,” I do not include the woman at the piercing salon who tried to discourage me from getting it done.

See, I took Aashi to get her ears pierced the minute she hit the two-month mark. A little anxious, but a lot excited, I was happy to be carrying on a tradition common to Robbie’s family and mine. But just as we were getting underway, a woman who was shopping with her teenage daughter came up to me and in the most condescending, critical and pointed tone, asked, “Are you really going to do that to your daughter?” (In case you are wondering, her daughter was there buying clip-ons.) Of course, I did what I set out to do that day and Aashi left with a little bit of bling in her ears. But for a moment there, this woman – who should have been minding her own business – had me questioning my decision, and by extension, my cultural norm. I had to question whether I was really being as crazy as she was insinuating.

It did not take me long to realize that I was not crazy at all, in part because two-month-old Aashi handled the piercing like a pro. 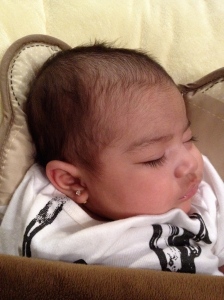 But what I soon came to realize – and what Robbie’s refreshing moment of cultural camaraderie only confirms – is that piercing a baby’s ears is not at all wrong or uncommon; however, criticizing and openly casting doubt on another’s cultural norms is wrong and unfortunately not that uncommon.

This point was recently affirmed by author and columnist Eleni N. Gage, whose writing explores identity, family and cultural beliefs, when she received much criticism and cultural commentary on her New York Times “Townies” article about her family’s decision to pierce her daughter’s, here.

To the several lofty and narrow-minded comments admonishing her decision, she provided a terse, yet humorous and very appropriate reply at the Huffington Post, here.

Like her, I have no regrets about piercing Aashi’s ears, because, as Gage so aptly states, it “help[s] show her what’s really important in life, right from the very beginning: Family. Tradition. Diversity. And, sandwiched between two blinged-out earlobes, an open mind.”