Proud to be Asian American

The other night while flipping channels, Robbie and I caught Director Jonathan Yi’s East of Main Street: Small Talk on HBO, in which a group of Asian American kids from different backgrounds speak honestly and openly – with innocence and humor –  about growing up Asian American, fitting in, and setting themselves apart. The 21-minute documentary is no longer On Demand, but hopefully it will become available again. Until then, here is a short clip:

I happened to catch the tail-end of the program – but even that was more than enough time to get sucked in, fall in love with every single kid, and shed a few tears as they happily and proudly discussed their identities.

Not Just an Other 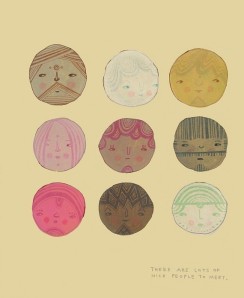 “There are lots of nice people to meet” by Laura Berger

Before a standardized test in grade school, my husband Robbie was having a difficult time deciding which racial identification box to check. His half-Filipino side made him an “Asian/Pacific Islander” but to check that box would only tell half his story. To simply check “Caucasian” for his father’s side was also incomplete, and therefore inaccurate. He raised his hand to get some guidance from his teacher, but her response was both disappointing and eye-opening. She looked at him, shrugged her shoulders and said, “Just check Other.” He learned then that despite the pride he felt for his Filipino, Spanish and Italian roots, and despite his strong sense of identity as part Asian American, some would always label him as unidentifiable –  just an “Other.”

Test-makers have since replaced “Other” with the label “Two or More,” and have increased and even changed the available racial identifiers. While changes to these forms may signify a positive shift in the overall perception of racial identification, I wonder if multiethnic and multiracial children themselves have developed a stronger sense of identity. Admittedly, Robbie occasionally felt marginalized around other Filipino American children because he neither looked like them, nor had as homogenous of an upbringing. When I think about how my Indian American background so easily dictated my membership and participation in Indian dance classes, school clubs, and even now, professional associations, I can understand why Robbie sometimes felt a little bit out of place. Robbie’s experiences then and now make me wonder how Aashi will one day identify herself and where she will fit in as she grows up in even less of a homogenous household than Robbie did.

So I ask:
How can Robbie and I teach Aashi to embrace her diverse religious and cultural background in the most harmonious way possible? And in doing so, how can we protect her from feeling like just an Other? END_OF_DOCUMENT_TOKEN_TO_BE_REPLACED